By Sarah Sakurazawa and Rowan Westwood 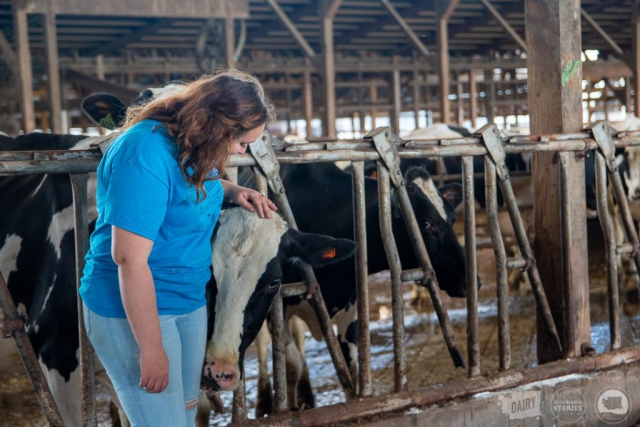 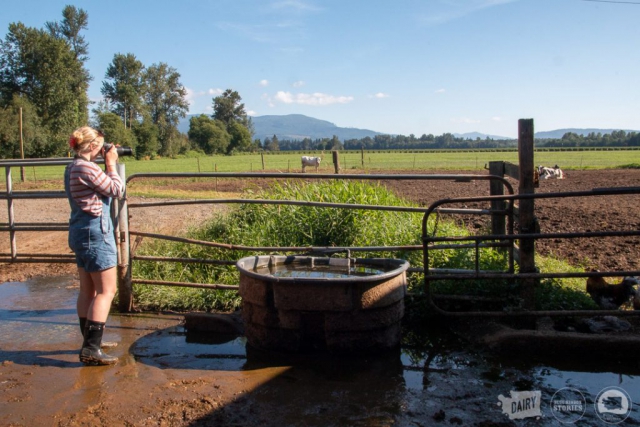 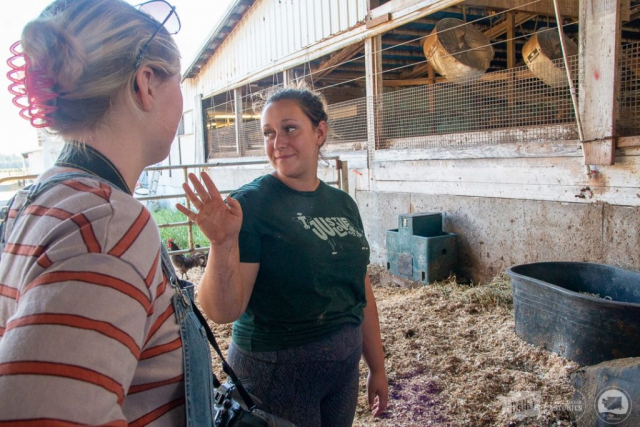 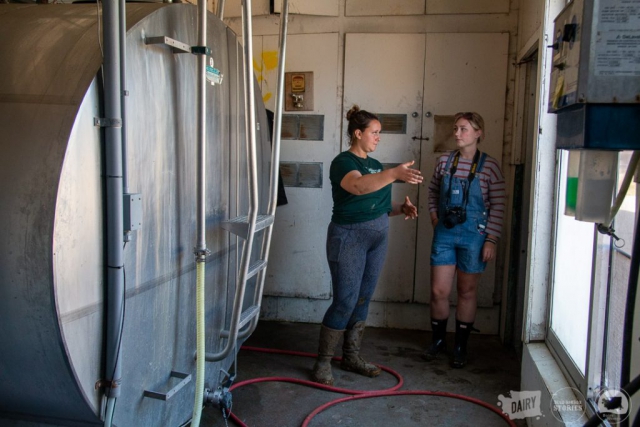 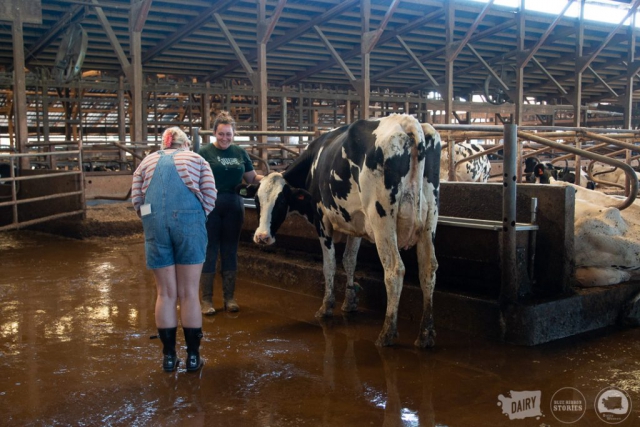 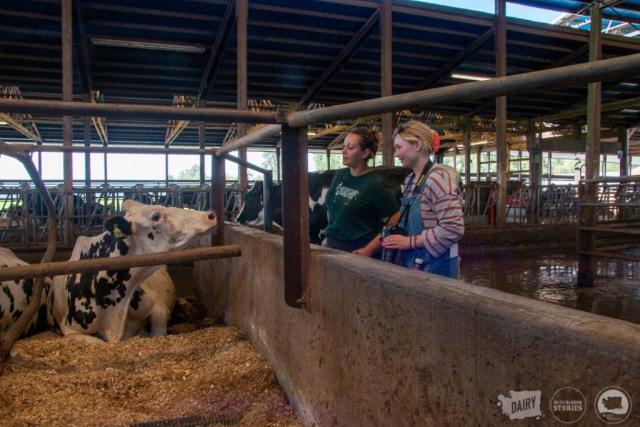 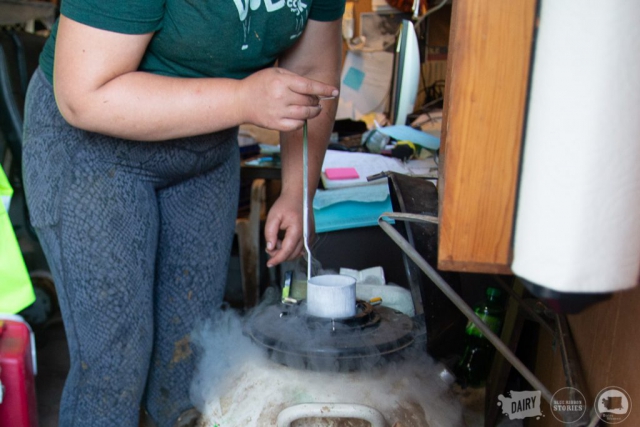 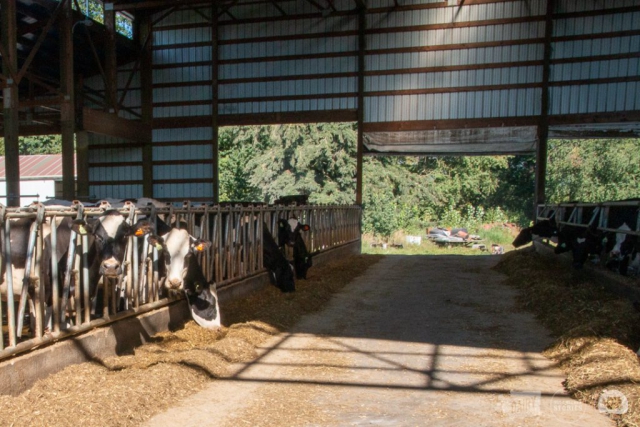 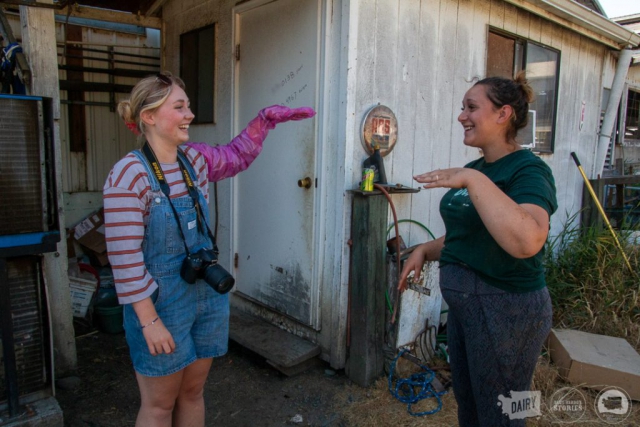 This story was written as part of an agriculture-reporting internship with the Whatcom County Dairy Women supported by a grant from the Dairy Farmers of Washington.

The low murmur of hundreds of cows chewing their cud fills the warm air as Brianna DeBruin ambles down a barn aisle on a summer day at Van Dellen Farms in Everson, Wash. Wearing a T-shirt that says “I just love cows, okay?,” manure-flecked leggings and neoprene XTRATUF boots, this 26-year-old herdswoman is responsible for keeping 800 cows milked, fed, rested and treated with total TLC. Her videos of how that happens in the barn, pasture and milking parlor have drawn nearly 13,000 followers on the popular social media platform TikTok.

Her aim is to share the reality of dairy farming. That might look delightful, as in a lineup of cows licking their lips with goofy glee. Or difficult – you try threading a two-foot long artificial insemination tube through the three rings of a cow’s cervix while rectally palpating its vagina!

DeBruin is one of the 29.7 percent of women working in dairy product manufacturing,  according to 2021 U.S. Bureau of Labor statistics.

She sees these Jersey and Holstein cows, which can range in weight from 950 to 1,800 pounds,  as “ultimate athletes” and her job as keeping them in peak condition. Starting as early as 5:30 a.m., DeBruin says her day consists of constant problem solving. “My job is I get here and I triage. All day long. All these cows get milked three times a day. On my shift, that has to happen once. I know at 10 o’clock pen one’s got to go. Which means their pens have got to be cleaned. And the whole process continues for groups one through six.” The cows will produce about 7,500 gallons of milk during her eight-hour shift.

Although the cows wear pedometers and ear tags that track each animal’s temperature, activity and rumination, DeBruin is hands on. “A computer can tell me a lot but not always everything. I go through pen 8” – a maternity area which holds about 50 pregnant cows near their due date – “probably 10 times a day.”

“Part of understanding a cow is knowing how to read their normal movements. I see them every single day. I know them.”

Though the black and white cows look identical to a visitor, DeBruin — who has  a degree in dairy management from Washington State University – spots potential symptoms. As a Lely Juno robotic feeder pushes a mix of grass silage, corn silage, grass hay, alfalfa hay and grain toward the cows, she points out one that’s mouth breathing. She explains it could indicate heat stress or that another cow is bothering it. “They pick on each other — it’s a like a big group of sisters, they’re not always going to get along great.”

While the barn is quiet except for an occasional moo and rooster crow, DeBruin is in continual motion. “Part of understanding a cow is knowing how to read their normal movements,” she says. “You learn that first, and then you can start to pick out the outliers. I see them every single day mostly, I know them.”

DeBruin started making TikToks in 2018 because of her interest in community outreach to help people understand cows and  just how much happens on a dairy farm. She hopes that using the social media platform will bridge the gap between consumer and producer. “What I enjoy most is seeing people who have never been around cows get to experience what an average day on the farm is like for me.” Her audience extends beyond the dairy community, ranging from members of her family – who don’t come from a farming background — to cow lovers across the United States.

Her 2019 “That’s My Baby Daddy” TikTok on artificial insemination drew most of her followers. Then a follow-up video showing the calf resulting from the procedure proved popular.

DeBruin stops by cow number 3407,  also known as Stacy. Who happens to be a pretty big deal on TikTok. “She’s my main go-to when I’m filming, because she’s very cooperative.”

Stacy also has quite the palate:  “She likes Flamin’ Hot Cheetos, fruit snacks and granola bars. Not a fan of bagels. Bagels are where she draws the line,” says DeBruin. She explains cows often prevent waste in the food chain by eating byproducts of food manufacturing or produce that can’t be sold for human consumption, from locally grown potatoes to bakery goods from nearby Skagit County.

“I constantly look for laboring moms. Yesterday I had a mom who had twins.”

Stacy’s favorite snacks are just one of myriad details DeBruin tracks with the help of a crew of four to five workers. Even the cows’ “feet are really important. We have a hoof trimmer come once every three weeks, every cow gets done twice a year at a minimum.”

“I check who’s in heat that day. And who needs to be bred and also who’s sick, not feeling good.” Since cows provide maximum milk production for about 10 months after they’ve had a calf and optimally are bred 90 days after calving, managing each cow’s breeding cycle is a complex part of her work. After breeding and during a nine-month gestation, there’s a convoluted schedule where cows are dry stock in a waiting period where they are not milked while they rest and prepare to give birth. DeBruin is managing about 500 bovine pregnancies at any one time.

Her day is literally about life and death. “I constantly look for laboring moms. Most of the time they can do it by themselves. But yesterday I had a mom who had twins. And they were both backwards” (in a breech position for birth). “So I had to get help doing that.”

It’s also about mundane details and the cows’ personalities. For example, “I know that 2501 always is going to limp in her right hip. That is her normal. I know that she likes to eat on this side of the barn and she likes to sleep on that side of the barn, because they’re creatures of habit. They like the same thing every day,” explains DeBruin.

The job is physically demanding. “Sometimes my arms aren’t long enough to reach where I need to reach” if a calf is positioned weird, says DeBruin. She might call on farm owner Jerry Van Dellen or another dairy worker to help.

The harder toll is emotional, she admits. Keeping 800 large animals healthy and productive inevitably entails loss. “I’ve had animals that I couldn’t help even though I wanted to, had to sell animals that I was close to, and I bring it all home.”

“Milk fever is what I see the most of,” she says. “It looks like a cow can’t get up. It’s pretty common. A cow has her baby and her body isn’t pulling calcium from her bones to put calcium into her milk so it creates an imbalance. Calcium controls muscles: They can’t swallow, and they can die from it. It’s also really easily treated” with intravenous calcium and appropriate diet management.

Her “That’s My Baby Daddy” TikTok on artificial insemination drew most of her followers.

DeBruin, who has worked at Van Dellen Farms for almost two years, is well versed in addressing mastitis, or inflamed tissue in the udders. One of her other favorite cows, Peppermint, or 2792, is special to her because she was the first cow DeBruin treated for mastitis from start to finish.

On top of all this, DeBruin shares what she does on TikTok about once a month with her 12,800 followers.  “It’s fun and exciting for me to teach people what goes into milking a cow or showing the start-to-finish process of artificial insemination,” she says. She says it takes about 45 minutes to film and edit each video.

DeBruin has no worries about running out of material. After eating 100 pounds of food and drinking 30-50 gallons of water each day, each cow poops up to 50-60 pounds of manure a day, all of which is then recycled into fertilizer and cow bedding on the 600-acre farm. “Cows are so incredibly useful,” says DeBruin. “Everything they do is super resourceful from how their stomach works to how they behave.” From her college days on, “I knew it would keep my interest forever.”

So next day she’ll do it all again –with 13,000 followers who can’t wait to see what Stacy and Peppermint are up to.